Watch the video with Guillaume here.

Guillaume Wegria is the co-founder and CEO of Fyteko. Fyteko, founded in 2014, is a Brussels-based start-up that creates natural biostimulants and biomolecules for agriculture improve agricultural yields and increase the resistance of plants to water stress.

Are aim is to increasingly reduce the number of chemical inputs and that is Fyteko's real mission. We are developing new biobased biomolecules with Fyteko that are non-toxic. Few companies are working in this type of sector with specific molecules like we are," explains Guillaume.

A positive impact for the people of Brussels and their city!

The positive impact on the environment that seems obvious is in the improvement of green chemistry.  The main impact for Brussels is the creation of jobs in research. In addition to recruiting qualified staff, several trainees from the universities of Brussels, Ghent and Mons gain valuable experience at Fyteko throughout the year. Fyteko actively stimulates research, employment and scientific cooperation in the Brussels region.

At Fyteko, we mainly employ R&D profiles. We have bioengineers with different specific focuses on biotech or agronomy, chemists (even though we work on bio molecules, the processes remain chemistry or biochemistry), PhDs, etc. As well as these scientific profiles, there are also people who work in general business, like Bénédicte who manages all the operational side, Denis who is the sales manager and Sarah who takes care of communications.

What was the impact of Innoviris financing for Fyteko?

Fyteko benefited from Innoviris' support very early on in its development. In 2015, they received the Innovative Starters Award (ISA), which allowed them to develop the foundations of R&D and intellectually protect their innovations. Today, their first product is launched. This was the key project that allowed the start-up to get up and running and develop their technology and first products. Based on this experience, another project was set up with a partner company in Germany in order to develop the use of this technology in a different way. To accomplish this, Fyteko was able to benefit from a Eurostars programme, funded by the European Commission, which involves Innoviris selecting and awarding funding at a regional level. In 2020, the company was fortunate enough to be one of the only companies in the biotech field in Belgium to receive an EIC Accelerator. Thanks to the European Commission and within the framework of Horizon 2020, the programme that selects the most pioneering start-ups in Europe and the most disruptive innovations, Fyteko received received two million euros in funding, which will clearly accelerate its development on the market.

The start-up recently submitted a project to Innoviris to reduce herbicide use in conventional agriculture.

"Two things come to mind when we talk about innovation: the invention itself and bringing that invention to market. At Fyteko, we have invented more than 20 molecules, but so far we have only brought one to market. We hope to do so with a second very soon. Innovation is the whole process, not just R&D."

What I like about my work is that it always has this aspect of innovation. Innovation does not necessarily happen just in in the lab, it's also in our thinking, our contacts with customers, etc. For example, we continue to do in silico technology monitoring on the computer. What's great about being CEO is the big picture. We can see everything that's going on and it's fantastic to see our work being done. It's something you rarely get as a scientist at university. With Fyteko, we see customers actually using our products and who are happy with these new molecules. We tell ourselves that we have not done all this for nothing!

After studying bioengineering in Brussels, Guillaume Wegria started working as a chemical engineer in the agriculture field. He stayed there for four months because the job mainly involved repetitive analysis and did not match his career orientation, biotechnology. He later received a proposal that was closer to his thesis at ULB. So he started working for a research centre in the Walloon Region, Materia Nova. This experience allowed him to evolve in the research field and develop new bioprocesses to produce enzymes. He stayed there for ten years, gradually taking on more and more responsibilities; first simple projects, then industrial projects for Belgian groups and finally the production of biomolecules. Guillaume then decided to do an MBA at Solvay, which allowed him to manage the entire biotech part of the centre, write innovative projects, follow the development of the team's projects, and more. Together with two colleagues, Juan Carlos and Benedicte, he decided to develop new molecules for agriculture using enzymatic synthesis technologies. As this was not the scope of Materia Nova, the centre's management suggested that they launch this project on the side and find their own funding. That's how Fyteko was born.

1) Have a solid, complementary team: for people who want to innovate, this really is the key point, according to Guillaume, because it is very hard to do it alone. Within Fyteko, the scientific, technological, administrative, marketing and human resources skills of Juan Carlos, Benedicte and Guillaume work together perfectly.

2) Surround yourself with technology: in the case of Fyteko, having key contacts with universities, agreements with research centres to gain access to labs, the support of university professors to be able to experiment, and bootstrapping have been a great help for the start-up.
3) Raise funds: it is important to have a patent or proof of concept before raising funds, to give confidence to investors. Thanks to Innoviris, there are very effective tools such as "Prove your concept", "Prove your business" and "Innovative Starters Award". 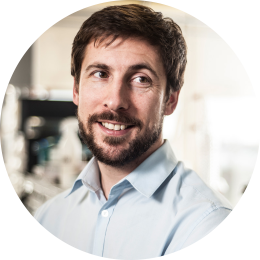