Emilie Steinbach, Brussels-based neuroscientist, has won the WATS (Women Award in Technology and Science) and will become the new female science ambassador. As ambassadress, Emilie aims to encourage young people to choose a scientific education and future.

Emilie responds enthusiastically to her election as science ambassadress:

"I think I had even more fun than the kids during the I Love Science Festival. They are super curious and interested, even from a very young age. This experience gives me extra motivation to get started as a science ambassador. "

Less than 20% of Belgian students obtain a higher degree in maths, science or technology 1, compared with European and OECD countries. This under-representation is also noticeable in an innovative region like Brussels.

The objective of the WATS (Women Award in Technology and Science) is to get more girls involved in STEM (Science Technology Engineering Mathematics) fields, to help discover their talent in those fields and match them with a study choice or career where they can make a difference.

The WATS prize and campaign was created by Innoviris to spotlight outstanding women scientists, as an inspiration for the next generation of women researchers, scientists, innovators and visionary administrators.

"We need all the talent we can get to manage our world in full transition. The current energy crisis could use new scientific insights, combined with technical professionals to realise innovative solutions. With a festival like I Love Science and the Women Award in Technology & Science, we want to sensitise young people, especially young girls, towards STEM. Everyone can play a role in scientific and technical development, regardless of age, gender or culture. Science is there for and by everyone,"

Through a call, women scientists could submit their applications for WATS to Innoviris. After a pre-selection, the general public could fully vote for their favourite candidate for WATS (Women Award in Technology and Science) since mid-September, via social media and also live during the I Love Science Festival.

Emilie Steinbach, a Brussels-based neuroscientist, PhD student at the University Sorbonne in Paris and inspirer of Feed Your Brain, wins the coveted WATS and becomes the new science ambassador in Brussels.

Besides the prize and the title, she will receive EUR 10 000 to support her mission.

She talks in advance about her ambitions as ambassador:

"I want to create and share a multimedia series on social media inviting women, active in STEM, to share their knowledge in an accessible way. The interactivity will be very important, the girls will be able to ask their questions live. The aim is to unravel these careers and show that they are not so abstract but, above all, enormously fascinating."

An award given by Barbara Trachte, State Secretary of the Brussels Capital Region, in charge of Economic Transition and Scientific Research, who declared:

"This year's election of the Brussels science ambassador attracted a lot of interest. We have already been able to go one step further together with the public. Brussels residents and visitors of the I Love Science Festival could not only vote digitally this year, but also when they experienced the workshops and WATS Talks of the brilliant scientists 'live'. Promoting science to female audiences is key to greater inclusion in science and technology, but doing so with a strong participatory dimension, as Innoviris is doing, is even more effective. I look forward to the initiatives Ambassador Emilie will take with and for young people. My congratulations go to all the candidates who have committed to the campaign and support inclusion in STE(A)M."

We would like to thank the three other candidates for their tireless commitment to the WATS campaign and wish them every success in their research and outreach to the general public: 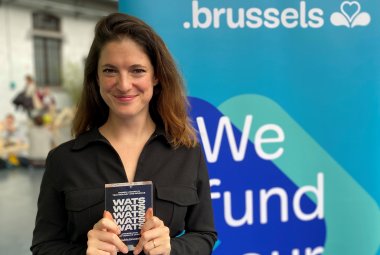