Deprecated function: Array and string offset access syntax with curly braces is deprecated in include_once() (line 20 of /var/www/clients/client21/web26/web/includes/file.phar.inc).
On 11 February 2021, Asma Boujtat won the Women Award in Technology and Science (WATS). Created by Innoviris, this competition aims to increase the number of women studying and working in science and technology. Asma has been a laboratory technologist at the de Duve Institute for the past 12 years. Now, at 35, she remembers her anxieties as a teenager, and the difficult task of making choices for the future at the age of 15. As an ambassador for STEM, she hopes that her enthusiasm will encourage girls to purse a scientific or technical career.

Secondary school opens up the world of science

Becoming a scientist wasn’t really young Asma’s dream. Like most girls today, she thought that science was the preserve of extraordinary people. “I didn’t really identify with the image of a bespectacled man with grey hair and lots of degrees, working alone at his microscope. So a career in science didn’t interest me.” But life is unpredictable. One meeting can turn everything upside down. “My biology teacher in secondary school was absolutely fantastic. His teaching methods instilled in me a passion for science.”

Learning about how the human body works made me realise that the world is full of little miracles.

The short route to becoming a lab technologist

Thanks to her biology teacher, Asma soon fell for science. But what kind of career did she want to pursue? This multi-talented woman decided to become a laboratory technologist. To accomplish her goal, she could either do a short course at a college of higher education or a multi-year course at university. “I wanted a short, practical course that was less specialised than a university degree programme. In my opinion, college graduates who start working feel more at home in the laboratory. When I graduated, I knew I could work in any kind of laboratory and in any field (microbiology, virology, haematology, etc.). And that freedom definitely attracted me.”

Experimenting in a laboratory helps you understand things much better than simply studying the theory and imagining the experiments.

Her first steps in the lab

Her internships took her to a hospital and then to a research lab. “The hospital internship was interesting. I took measurements and analysed samples from patients. But the work was too routine for my liking. During my internship in a pharmaceutical lab, I worked with white blood cells from mice. Every day was different. That’s when I knew I was destined for a research lab.” Listening to Asma talking about her first job in a pathology laboratory, she’s like a curious child who’s just discovered the wonders of the human body in intricate detail. “I worked with forensic pathologists, preparing microscope slides. I really learned a lot, but I couldn’t see myself making a career of it.”

Meanwhile, Asma Boujtat has been working as a laboratory technologist at the de Duve Institute for the past 12 years.

I feel good here because it’s a very pleasant environment to work in. We really need to debunk the cliché of scientists beavering away on their experiments all alone, talking to no-one. Since I started working here, I’ve never met so many people. What’s more, the de Duve Institute welcomes scientists from all over the world. My colleagues come from Egypt, Tunisia, Korea, Spain, France, you name it. This diversity is very enriching.

What exactly does Asma do as a laboratory technologist? “I provide technical support to the researchers so as to lighten their workload and make their lives easier.” She spends her days observing, making adjustments and experimenting, over and over again. “This job really suits me perfectly.” Asma has found her niche in the lab and has gradually specialised. She is now the protein purification specialist in the basic research lab. Her job is to isolate proteins from cells or tissues in order to examine the bacteria they contain. “A few years ago, I was working on a protein that was particularly difficult to purify.” After months of failure, Asma’s tenacity finally paid off. “When I set my mind on something, I won’t stop until I reach my goal. It took a lot of determination, but I made the researchers' work a little easier. And I’m very proud of that.”

I work behind the scenes of the research process. But every little step in that process contributes to making the world a better place. And helping researchers to do their job really makes me happy.

Asma Boujtat on her role as Ambassador in Brussels

Asma is delighted to be appointed Technology & Science Ambassador. “Now I can actually do something about the clichés going around about scientists. I don’t have a university degree or a PhD. Yet, with the work I do, I make a valuable contribution to science. As a teenager, I was very intimidated by people who had studied for many years. That’s typical. At that age you’re insecure, and it’s easy to think that something like that is not for you.” “There’s room for everyone in research. I want to be an example both to girls who want to embark on a long course of study and to those who don’t.”

Asma takes her role as ambassador very seriously. As someone who loves talking to people, she’ll be in her element meeting girls to raise their awareness, reassure them and answer their questions. “Through workshops and games, I want to introduce them to science and at the same time dispel the image of the boring and serious scientist. I want to bring some fun into the world of science.”

Asma herself is a mother of two, though she still remembers how she felt as a 15-year-old girl. “I recall the fears and anxieties I had back then. That helps me understand today's young people better, I think. I hope I can set something beautiful in motion with this initiative.”

There’s still a long way to go. Yet Asma can also see that a long way has already been travelled, and more and more women are choosing a career in technology or science.

Women bring serenity to the workplace, but also dynamism. With their new ways of thinking, they are the perfect complement to their male colleagues. It would be a shame not to take advantage of that.

Asma Boujtat gets her energy from the little joys in life. “Every morning when I wake up, my children give me energy. And during the day I get energy from my work.” She is a mum, laboratory technologist and Technology & Science  Ambassador. Exactly the kind of woman she has always looked up to. “I have a huge respect for women who manage to combine their private life with their work. The French poet Paul Eluard wrote: Il n’y a pas de hasard, il n’y a que des rendez-vous (There is no such thing as chance, only encounters). The people we meet in our lives, we do not cross their path by chance. They are there to help us make choices, change direction and grow as human beings.” Hopefully, that is exactly what Asma can do for those young girls, get them excited about science, just as her biology teacher did when she was a teenager herself.

Why is it important for Innoviris to support scientists like Asma?

Women are still strongly under-represented in the STEM areas, i.e. Science, Technology, Engineering and Mathematics. In the Brussels-Capital Region, in the STEM disciplines, only 20% of secondary school students and 35% of university students are female. This under-representation is much higher in Belgium than in almost all other European and OECD countries.

But we do in fact need those women to take a step forward. With the WATS campaign, we therefore want to put the spotlight on women in the world of science and technology. Candidates for the award were given the opportunity to talk about their work in a video and thus inspire young girls. As Ambassador 2021, Asma Boujtat will be the face of campaigns designed to encourage more girls towards STEM. She will also receive €10,000 to set up her own efforts to promote science careers to women. 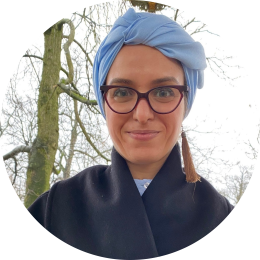