Veronique De Leener has been working as a teacher and coordinator in a Center for Part-time Education in Molenbeek for 14 years. At the moment the Flemish Community Commission announced they would be making funds available to fight poverty among young people in Kuregem, she grabbed the opportunity with both hands. In 1999 she founded Maks, an organisation that digitally empowers vulnerable groups in the poorest neighbourhoods in Brussels and helps them uncover their unrealised personal talents. One of the projects is Capital Digital, a programming school where 15- to 18-year-olds teach younger children between the ages of 8 and 12. Veronique: ‘Young people discover what they’re good at, become more self-confident and often do better at school.’

From computer room to Capital Digital

In 1999, as one of its first initiatives, Maks vzw made a number of computers accessible to neighbourhood residents. Every day between 4 p.m. and 6 p.m., there was a line of children queuing, eager to play games. Veronique wanted to do more with that enthusiasm. Playing games is fun ... But making your own games is a lot more fun and more rewarding. The first programming and coding sessions grew into digital camps. And so Capital Digital was born. Now, in every school-holiday period, the youngsters from the neighbourhood are able to follow lessons to learn computer languages, how to make games, apps and music, and how to program robots.

We support long-term jobseekers and young people in their digital knowledge, pedagogic skills and self-confidence.

Capital Digital is much more than a project about digital literacy. It’s the older children who teach the younger children. And moreover the 15- to 18-year-olds are given training and coaching by long-term jobseekers who have undergone their own special training. ‘We support the long-term jobseekers and the young people in their digital knowledge, pedagogic skills and self-confidence,’ explains Veronique de Leener. ‘Young people who previously used to just hang around in the streets now have the status of teachers—they’re looked up to. Parents sometimes call to say that their son or daughter has been doing better at school since Capital Digital. The response from the young people to this is a little funny; when they find themselves standing in front of the class, they recognise how annoying it is when students make a lot of noise or don’t pay attention. They respect their own teachers more. In the meantime, quite a few of our instructors have chosen to follow teacher training.’

Innoviris has been financing the Capital Digital project for a number of years. For Evy Ceuleers, Team Leader for Science Promotion at Innoviris, it is this broad impact that has led to the results: ‘Veronique is not just responding to the need for digital literacy and the great shortage of IT profiles. She is succeeding in reaching a large group of vulnerable young people and their circle of peers. It's also remarkable how many girls are taking part. The older girls become role models for the young children, inspiring them to choose technological, technical and scientific education and professions. That’s fantastic to see.’

Another wonderful effect Capital Digital has had: more and more parents are enrolling for activities with Maks vzw. They see what their children are able to conjure up on the computer and want to help support them. In this way, they learn to use the internet better themselves. And they need to. Because nowadays, if you want to apply for a study allowance, you have a request for your bank, or you want to apply your free Hello Belgium Railpass, it all runs digitally.

With the programming lessons, Capital Digital reaches a large group of vulnerable young people and their peers.

Whoever uses the computer needs to teach

With the coronavirus, life in Belgium has become increasingly digital. But how do you keep up if you don’t have a computer or access to the internet? With the support of the King Baudouin Foundation, Maks vzw has been making computers available to the neighbourhood. But there’s more to it than that.

‘The young people only get a computer on condition that they follow a course about internet safety and computer maintenance, and they commit to give at least five other people computer lessons. If you’re confronted with discrimination your whole life, you may feel inclined to see yourself as a victim. With these computers, we light a fire under them. Instead of waiting for help, they learn to take the initiative.’

Veronique De Leener is now also organising a ‘makers club’ for 12- to 14-year-olds, gives coding lessons at school, and has started digital storytelling. What is she still dreaming of? A little more financial security for Maks vzw and the recognition of a genuine STEM academy in Brussels. 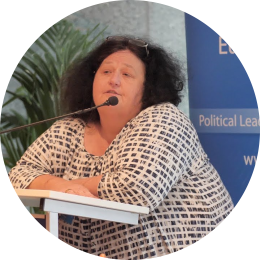